When a honey bee stings a person, it cannot pull the barbed stinger back out. It leaves behind not only the stinger, but also part of its abdomen and digestive tract, plus muscles and nerves. This massive abdominal rupture kills the honey bee. Honey bees are the only species of bees to die after stinging.

The first thing, when stung by a bee, is not to panic. Your panic, anxiety, only excites the bees bringing on more bites. It also hastened the blood flow throughout your body allowing the venom to other areas.

About 3% of people stung by bees and wasps have an allergic reaction to the sting, and up to 0.8% of bee sting victims experience the severe and life-threatening allergic reaction known as anaphylaxis. Many people believe they are allergic to honey bees when in fact they are experiencing symptoms of a normal reaction.

If stung by a honey bee, the first thing you should do is remove the stinger. The end of a sting is barbed and will remain stuck in the skin even if the bee is removed. Muscles in the stinger allow it to continue pumping venom into the victim, even if it is no longer connected to the bee, for up to a minute or until the stinger is removed. The sooner the stinger is removed, the less venom will enter the wound. Honey bees are able to sting only once and eventually die after they have released their stinger. 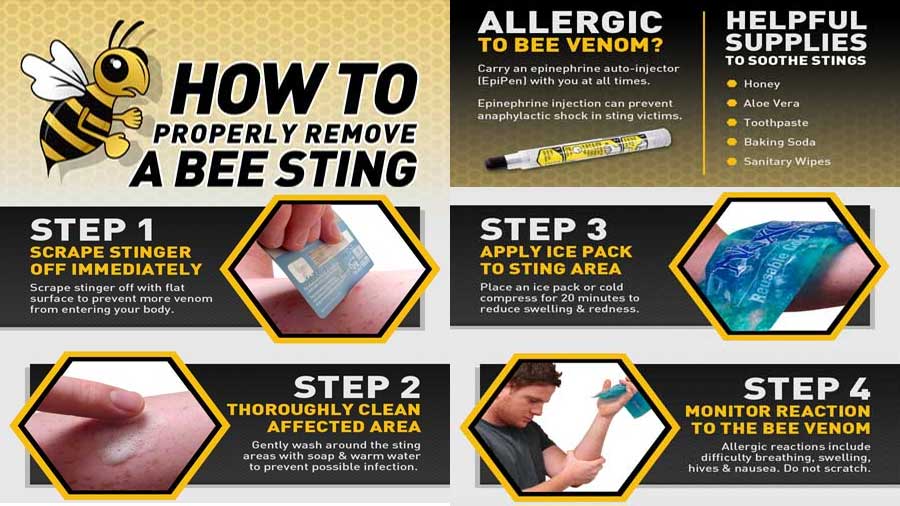 Two kinds of reactions are usually associated with bee stings and those of other stinging insects as well: (1) local or (2) systemic, allergic, or life-threatening.


A local reaction is usually characterized by pain, swelling, redness, itching, and a wheal surrounding the wound made by the stinging apparatus.

Swelling can sometimes be severe. For instance, if stung on the finger, the arm may be swollen even up to the elbow. Swelling such as this is fairly common, even though it may be alarming. However, a more serious allergic reaction may be indicated if swelling occurs in other parts of the body besides the general area in which the sting occured. For example, if stung on the left hand and the right hand or neck shows swelling you should seek medical attention immediately. Normal swelling may last up to a few days.

During the days following a stinging incident, the wound may itch.
This is the reaction of a majority of persons and those suffering it are considered to be at little risk of death, unless the mouth or throat is affected so that the respiratory tract is obstructed. Many in the general population continue to believe that because they “swell up,” they are at risk of losing their life when stung by bees.

The Oregon Master Beekeeper Program has published a great guide on Bee Stings.

How to alleviate the sting: Swelling may be reduced by icing the wound and/or taking an antihistamine such as Benedril. Topical solutions such as calamine may also help to alleviate pain associated with stinging. It is beneficial to drink plenty of water.


It is possible to have a severe allergic reaction to a bee sting that is not life-threating. Remember, if an allergic reaction occurs, do seek medical attention immediately, but don’t panic. Panic will only worsen the reaction. Allergic reactions to bee stings can develop anywhere on the body and may include:

If you experience any of these symptoms, seek emergency medical assistance immediately.

Symptoms can begin immediately following the sting or up to 30 minutes later and might last for hours. Anaphylaxis, or the inability to breathe, may occur within seconds or minutes of a sting.

Anaphylaxis, if treated in time, usually can be reversed by epinephrine (adrenaline) injected into the body. Individuals who are aware that they are allergic to stings should carry epinephrine in either a normal syringe (sting kit) or an auto-injector (Epi-Pen) whenever they think they might encounter stinging insects. Epinephrine is obtainable only by prescription from a physician.