In our northern environment our bees are subjected to cold damp weather through the winter months. As the hive forms a ball of bodies in the upper middle section box they are able to withstand the cold.

Yet the heat generated by their bodies opposing the cold outside the huddle produces condensation. Consider a house window or your car on cold mornings.

Thus in your post winter inspection you may find a whitish mold on the frames. 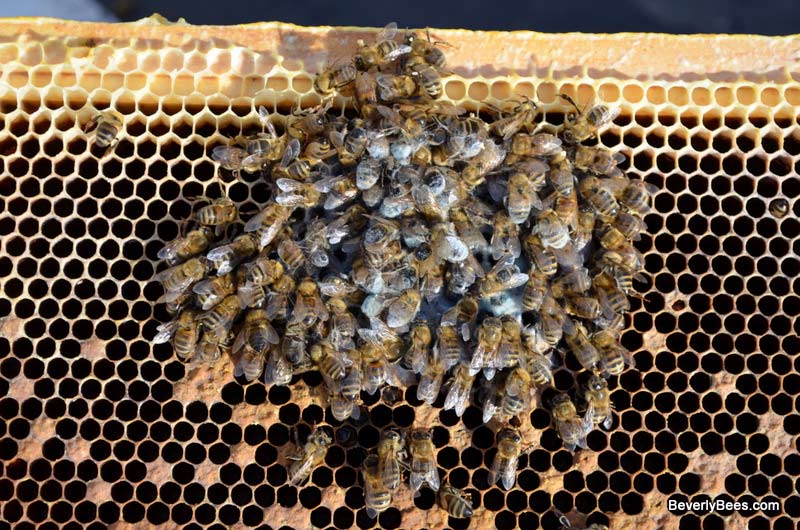 A variety of molds will grow on the combs when the moisture in the hive gets too high. The moisture gets too high when there are not enough bees to fan it away. I suppose the confusion arises because these moldy combs frequently contain dead bees that are also covered with mold, so it looks like the mold killed everything.

A variety of molds will grow on the combs when the moisture in the hive gets too high. The moisture gets too high when there are not enough bees to fan it away. I suppose the confusion arises because these moldy combs frequently contain dead bees that are also covered with mold, so it looks like the mold killed everything.

According to various sources, one of the molds frequently found on combs is Penicillium waksmanii which can actually inhibit the growth of certain bacteria, including American foulbrood. Other molds are usually present as well, as evidenced by the different colors—usually blue, white, yellow, or gray.

If you have a dead hive loaded with mold you will be tempted to discard the comb, but it is usually not necessary. The first thing you need to do is decide how the colony died or became weak.

Was honey immediately available on the central frames? Do you find white specs scattered about the cells (mites)? In other words perform a hive autopsy, find another beekeeper to provide a ‘second set of eyes’.

Dr. Roger Hoopingarner, of Michigan State University, notes that most hives die from Varroa or starvation.

It important to note the time of year your hive died. If your hive died over the winter it may have died from condensation, starvation or cold which is typical in a winter killed hive. Nosema is also more common in the winter when bees cannot get outside to defecate regularly. If your hive collapsed in the fall, varroa could be the culprit as the population of varroa is usually highest then. Performing an autopsy of a honey bee colony is like solving a mystery and a variety of clues must be found and taken into account together, before you can make a final analysis of what happened to your hive. Here are some other basic clues to look for.

Does the colony have a queen?

Are eggs and open brood in the cells? Is the brood mostly drones? Are there many emergency queen cups or cells?

A colony without a queen, eggs or brood and many emergency queen cups or cells may have lost their queen and were unable to replace her. If the queen is present in the hive but dead, and it is not a winter kill, there should be eggs in the cells and open brood. If there are no eggs or open brood, the colony may have died from queen failure. A large number of drone cells may indicate queen failure or laying workers if the queen is absent.

Do you see a lot of varroa on the bottom board or on capped brood when you remove them from their cells for inspection?
If so, your hive may have suffered from varroa collapse.

The red dots are varroa. If you see many of these on your bottom board your hive may have died from a varroa infestation.

The red dots are varroa. If you see many of these on your bottom board your hive may have died from a varroa infestation.

Do the bees that died look healthy or are they deformed with short abdomens and missing or stubby wings?

Deformed bees with stubby abdomens and missing or deformed wings may have deformed wing virus which is usually spread from varroa. Look at the bottom board for signs of varroa, the combs for white varroa feces, and pull some capped brood to examine them for varroa infestation.

Do any of the bees have wings separated making the shape of the letter K?

Your hive may be infected with K Wing Virus which can be caused from Varroa, Trachael Mites or Nosema. More investigation will need to be done.

Did the bees die with their heads in the cell, butts sticking out, away from honey stores? Was the weather previously cold?

Your bees may have died from starvation. This happens often in cold weather when the hive is unable to break cluster to move to their stores. This is common in a winter killed hive.

If you can eliminate American foulbrood and colony collapse disorder, then you can re-use the combs.

The first thing to do is take the frames to a warmish, dry place where they can dry out for a few days. These things can smell wicked—like moldy stuff does—so put them in a place where they won’t bother you. Separate any frames that are molded together and let them air dry. As they dry the mold growth will slow down and then stop.

Once the combs are dry you can store them in an empty super. After your colonies build up in the spring you can place the moldy super on top of a big, vigorous colony and the bees will clean and polish every cell in a matter of a few days. Worker bees always clean old cells prior to re-use anyway, so this is not an unnecessary burden on the bees. The bees are very thorough and, after they are done, the combs can be used for brood or honey production. It’s amazing, but no taste or smell of mold will remain on the combs.