Drone Congregation Area (DCA) – The major component of the mandibular gland secretion of queen honeybees, 9-ODA ((2E)-9-oxodecenoic acid), has been known for more than 40 yr to function as a long-range sex pheromone, attracting drones at congregation areas and drone flyways.

Workers and drones have their own separate flight regions in the air. We learn that the flight paths of drones are not always random ones, but that the drones may be drawn irresistably to certain locations, which they are then most reluctant to leave.

The single function of a honey bee drone is to mate with a young queen. The large, well-developed eyes—along with extra sensitive antennae—allow the drone to track down the powerful, high-flying young queens. Together, the eyes and antennae provide a tracking system of the first order. 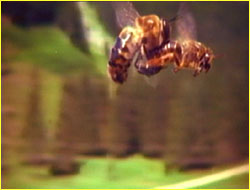 Drone congregation area (DCA) is a place where drones fly most of the time after leaving the nest. The DCA is 100-650 feet in diameter and 50-130 feet above ground. Drones fly back and forth in this area producing audible sound similar to a swarm of bees. Drones can choose among many DCA near the apiary. During its life a drone can visit few different DCA. Sometimes more than one DCA is visited by the same drone during one day.

The same place can be chosen by honey bees as DCA year after year, however, it is not known what makes the places attractive to drones. It was suggested that choice of the places is related to perception of Earth’s magnetic field or visual features on the ground. Usually there is an open space around DCA without trees or hills. Sometimes it is located over water or forest. Formation of DCA can be affected by pheromones produced by drones. In order to confirm presence of DCA, caged queen fixed to a balloon is placed in mid-air.

In order to reach DCA drones travel up to 4.3 miles and cross mountain ridges half a mile high. Mean flight distance of drones is a half mile. The drones prefer DCA located close to the nest.

Number of drones present at DCA depends on weather and time of day. It can range from few hundred to few thousand. Drones at DCA may not be related.

A mature Drone goes to a DCA (aka singles bar) and waits for young a queen to fly overhead. The drone senses queen pheromone with his antennae and can see her through the top-mounted eyes. Only the fastest and most skillful fliers will be able to mate—an accomplishment with a great price. After mating, the sexual organs are ripped from the drone’s body and it will soon die.