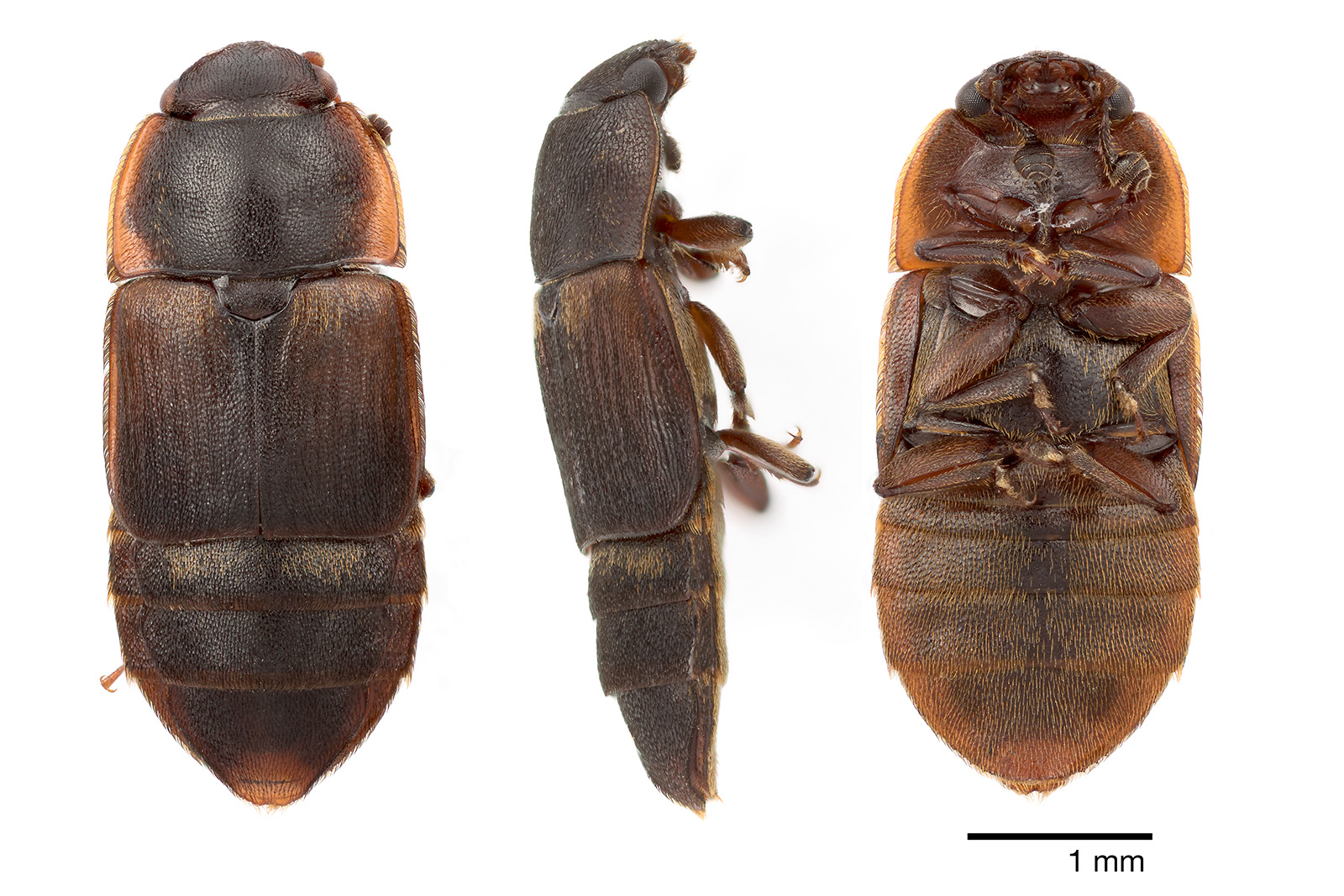 Yesterday, while installing a Package, a beekeeper in Portland felt certain a Small Hive Beetle, SHB, accompanied the mix. Our honey bees have been devastated by the Varroa Mite over the past years, but with the emergence of the small hive beetle we enter into a new era of concern and control. It has slowly been moving from South American through the Southern States of America toward the North.

There are other beetles which may inhabit the hive, yet are not significant or damaging as the Small Hive Beetle. 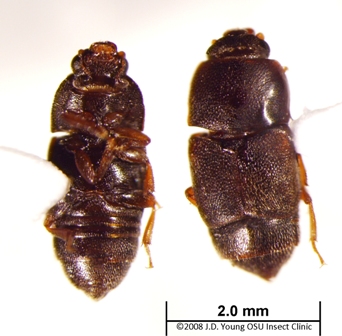 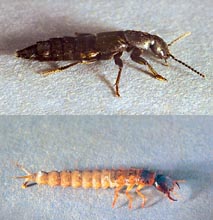 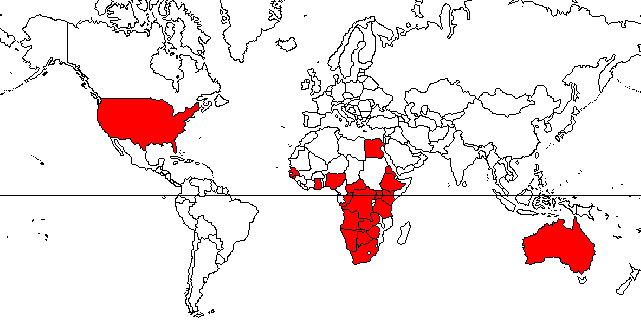 The SHB is native to sub-Saharan Africa where it is an occasional pest in colonies of African subspecies of the western honey bee. 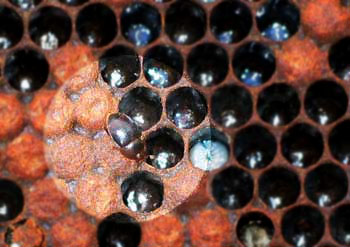 It is easy to read a book or watch a YouTube video, but see with your own eyes, touch, smell, or feel differing issues surrounding our honey bees cannot be replaced. Toward the end of our visit to the National Honeybee Laboratory in Beltsville Maryland, Dr. Fernando Vega, entomologist, brought out a tub with a frame devastated by the Small Hive Beetle. 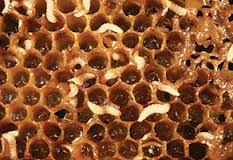 You will note the pollen cells appear liquid rather than the typical solid presence. Toward the upper left quadrant is a cell with a ‘burst’. This would be the Small Hive Beetle exiting its cell.

When spotting a larvae in your hive the challenge becomes – “what is it?” Typically it becomes a choice between the SMB and the Wax moth larvae, which have similar larvae appearance. The small hive beetle larvae are off-white in color and grow to a length of about ½ inch (approximately 10 to 12 mm). They are similar in appearance to the greater wax moth larvae (Galleria mellonella) and hence may be confused with them. Both have three pairs of well-developed legs on segments behind the head, but the SHB larvae can be distinguished by the absence of modified appendages, called prolegs, past the third segment (Figure 4). However, greater wax moth larvae (Figure 5) have prolegs on the third through the sixth body segments. SHB larvae have numerous dorsal spines, which wax moth larvae lack. SHB larvae produce slime, whereas wax moths have silken protective webbing. 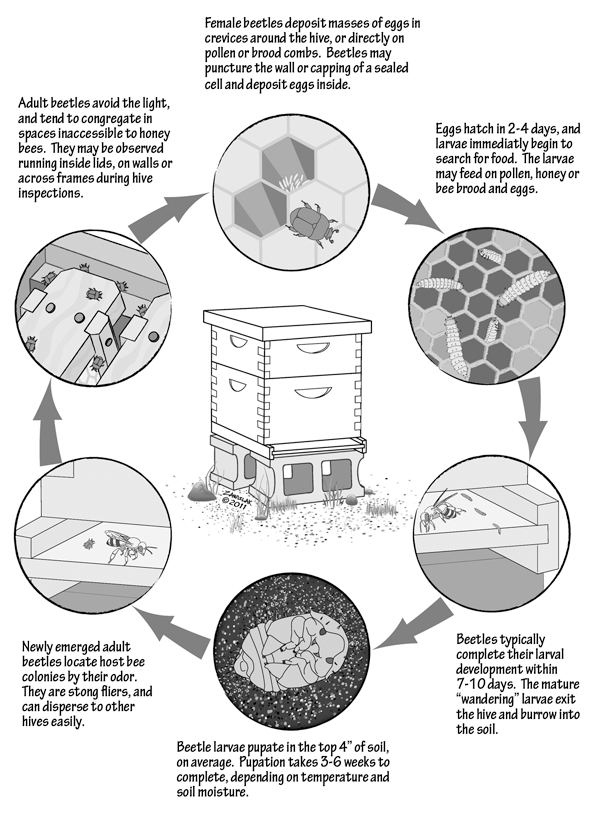 Newly hatched larvae immediately begin feeding on whatever food source is available, including honey, pollen, and bee brood, though they have demonstrated a preference for bee brood. Maturation time for larvae is generally 10-16 days although some may feed longer than a month. Once the larvae finish feeding, a wandering phase is initiated where larvae leave the food source and migrate out of the colony to find suitable soil in which to pupate. It is believed that the majority of larvae do this at night in the cover of darkness (Ellis and Hepburn 2006).

Larvae in the wandering stage may wander great distances from the hive to find suitable soil. Despite this, most larvae pupate within 90 cm of the hive. Nearly 80% of the larvae burrow down into the soil less than 10 cm from the soil surface but not generally more than 20 cm. Once larvae cease burrowing, they construct a smooth-walled, earthen cell in which they pupate. The period of time spent in the ground pupating can vary greatly depending on factors such as soil temperature, moisture, and composition. However, the majority of adults emerge from the soil in approximately three to four weeks. Upon adult emergence, the entire life cycle begins again. The turnover rate from egg to adult can be as little as four to six weeks; consequently, there may be as many as six generations in a 12-month period under moderate climatic conditions.

Prevention is the most effective tactic of small hive beetle control. Chemical controls are available, but are of limited use. Good beekeeping management practices in the bee yard and in the honey house are sufficient to contain hive beetle problems in most cases. A combination of cultural and mechanical controls will usually help to maintain beetle infestations within a manageable range.

Use caution when combining colonies or exchanging combs and hive bodies, because beetles and their eggs can be introduced into other colonies, which can be overwhelmed. Making splits from heavily infested hives can cause a serious outbreak if insufficient numbers of bees remain to protect the hive. Avoid over-supering hives, which increases the area that the bees must patrol.

Maintain a clean apiary and honey house to reduce attraction to beetles. Avoid tossing burr comb onto the ground around hives, which may attract pests. Adult beetles tend to prefer shady locations. If possible, place hives where they receive direct sunlight at least part of the day. Keep hives and frames in good condition. Warped, cracked and rotten hive bodies provide beetles with many places to hide, and make them more difficult to detect by bees or beekeepers. When debris is left to accumulate on a bottom board, beetle larvae can complete pupation inside the hive. Regular cleaning or use of screen bottom boards can prevent this build-up of debris.

Honey that is removed from a colony should be extracted within 1-2 days. Wax cappings are an attractive food for beetles, and should be processed quickly or stored in sealed containers. Honey supers can be removed from weak colonies to lessen the territory of combs that the bees must patrol. If not ready for extraction, these supers can be placed on strong colonies, in a manner similar to protecting them from wax moth infestations. However, if small hive beetles or their eggs are present on the combs, the addition of these beetles can be sufficient to cause the strong colony to collapse. Honey supers can be frozen at -12°C (10°F) for 24 hours to kill all stages of beetles before transferring supers to a strong colony. Store empty supers under conditions of good air circulation and less than 50% humidity.

Pollen traps should not be left on heavily infested hives for extended periods. The unprotected pollen can serve as a substantial protein source for beetles, as well as a protected breeding site.

Utilize mechanical traps in the hive to reduce the number of adult beetles that can produce eggs, while also reducing the need for pesticides.

Numerous mechanical trap designs are available for use in the hive to control the adult SHB population. Most traps kill beetles by drowning them in vegetable oil or mineral oil. The traps have small openings that allow beetles to enter, but restrict the larger honey bees. Some traps utilize a fermenting bait to attract the beetles into the trap, but beetles will enter non-baited traps to escape from the bees. By maintaining a manageable adult beetle population in the hive, beekeepers can often prevent a major infestation of beetle larvae, which cause the the most destruction.

The West Trap is placed on the bottom board, and requires a wooden shim to maintain proper space beneath the frames. It contains a shallow pool of oil, and is covered by a slatted screen that excludes bees. Adult beetles enter the trap from above, to escape from bees, and fall into the oil and drown. Hives must be kept extremely level for these traps to be effective. These traps preclude the use of screen bottom boards for ventilation.

The Hood Trap attaches to a standard bee hive frame. It has a compartment filled with apple cider vinegar as an attractant, and compartments filled with mineral oil, which drown the beetles as they enter. A potential drawback of this design is the empty space around the trap, which bees will often fill with drone comb, increasing a problem with varroa if left unattended. This area of drone comb, however, can be regularly removed and disposed of when about 50% of the drone cells are capped, which can effectively trap and remove a portion of reproducing varroa mites before they can emerge.

The Freeman Beetle Trap is similar to the West Trap in function. It replaces the bottom board with a 3 mm (1/8”) screen mesh, as used for varroa control. An oil-filled tray is inserted into a compartment below the screen. Adult beetles enter the trap to escape from bees, and fall into the oil and drown. Wandering beetle larvae may also fall into the trap as they attempt to exit the hive to pupate. These traps can passively eliminate some varroa mites as well. Hives must be kept level for these traps to work.

A variety of beetle traps, such as AJ’s Beetle Eater and Beetle Jail Jr., consist of shallow oil-filled troughs with slotted lids. These traps are suspended between frames of brood or honey. Adult beetles enter the traps to hide from bees, and are drowned in the oil. These types of traps are inexpensive and easy to use, but may need to be emptied and refilled regularly. Over time the bees may tend to propolize over some of the openings. Some manufacturers suggests placing a small sheet of vinyl across the top of the trap to prevent propolizing, but this may provide the beetles with sufficient cover without entering the trap. Similar in design and function, Cutt’s Beetle Blasters are disposable, and can be discarded when full of beetles.

Beetlejail traps are designed to prevent hive beetles from invading a bee hive, by trapping them as they seek to enter, and drowning them in oil.

Sonny-Mel traps are homemade, consisting of a small plastic sandwich box, with 3mm (1/8”) holes. The bottom of the trap contains a shallow layer or layer of mineral oil, and a smaller container (usually a small plastic jar lid or bottle cap) of liquid bait. To make a bait, combine 1 cup water, 1/2 cup apple cider vinegar, 1/4 cup sugar, and the peel of 1 ripe banana (chopped in small pieces); allow to ferment for 1-2 days. These traps are placed on the top bars of the upper super, and require the addition of a wooden frame to provide space for the trap.
This summary is provided as a convenience for the reader. The mention of any brand name or commercial product does not constitute or imply any endorsement, nor discrimination against similar products not mentioned.