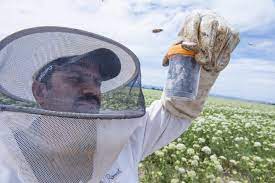 Dr. Sagili is an Assistant Professor in the Department of Horticulture at Oregon State University. He obtained his PhD in Entomology from Texas A&M University in 2007. He has a bachelors and a Masters degree in Agriculture from A.P. Agricultural University, India. His primary research focus is honey bee health, nutrition and pollination. His research has been published in leading journals such as Behavioral Ecology and Sociobiology, Naturwissenschaften, Journal of Insect Physiology and Journal of Economic Entomology.

Sagili, assistant professor and Extension specialist in the horticulture department, is an expert in honey bees. He heads the Oregon State Honey Bee Lab and the Oregon Master Beekeeper Program. He received his doctorate in entomology from Texas A&M University in 2007.

Dr. Ramesh Sagili is an Associate Professor in the Department of Horticulture at Oregon State University. He obtained his PhD in Entomology from Texas A&M University in 2007 specializing in honey bee research. His primary research focus is honey bee health, nutation and pollination. Ramesh initiated the creation of the Oregon Master Beekeeper Program and chaired the Oregon Governor’s Task Force on Pollination Health. His research program addresses both basic and applied questions to improve honey bee health and nutrition, hence a majority of his projects are collaborative efforts involving stakeholders (beekeepers and growers). He has authored several important research and extension publications along with an application titled “How to reduce bee poisoning from pesticides” that is being used by many beekeepers, growers and pesticide consultants/applicators in the country. He has received several awards including the Entomology Society of America Pacific Branch Research Award, Eastern Apicultural Society’s Outstanding Research Award and OSU Outreach and Engagement Award.