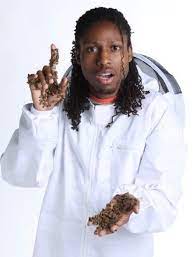 Samuel Ramsey’s enduring interest in insect biology started 23 years ago and shows no signs of waning. Having earned his doctorate from Dr. Dennis vanEngelsdorp’s lab at the University of Maryland; Dr. Ramsey maintains a focus on how insect research can benefit the public through the development of Integrated Pest Management (IPM) strategies and STEM-based outreach initiatives. His award-winning research on Varroa biology has changed the standing paradigm on how this parasite ultimately kills honey bees leading to opportunities to share his work nationally and internationally. He graduated with a Bachelor of Science in Entomology from Cornell University in 2011 focusing his research on predator/parasite behavior.

His current work, aptly named the Fight the Mite Initiative, was funded largely by generous support from the beekeeping community in response to his work in rehabilitating the industry.

At the forefront of this scientific inquiry, he has had many opportunities to share his work internationally. Dr. Sammy firmly believes that the ability to articulate one’s findings to anyone who wants to hear them is just as important as the skills needed to reach important findings in the lab. This conviction is evidenced by his engaging scientific presentations and his contagious excitement in supporting the entomological community. Through non-traditional forms of media such as Instagram.

Samuel Ramsey graduated with a Bachelor of Science in Entomology from Cornell University in 2011, focusing his research on Predatory and Parasitic Insect Behavior. He cultivated an interest and expertise in the close relationships between insects and other creatures (symbioses) and dedicated his doctoral research to understanding a parasite killing honey bees globally (Varroa destructor). As he closely examines the biology of honey bees, their associated parasites, and related threats, he considers how discoveries can best be made available to everyone. Sammy strives to understand the behavior and biologies of these threats in isolation while developing preventative and emergency measures to preserve honey bee species at home and abroad.